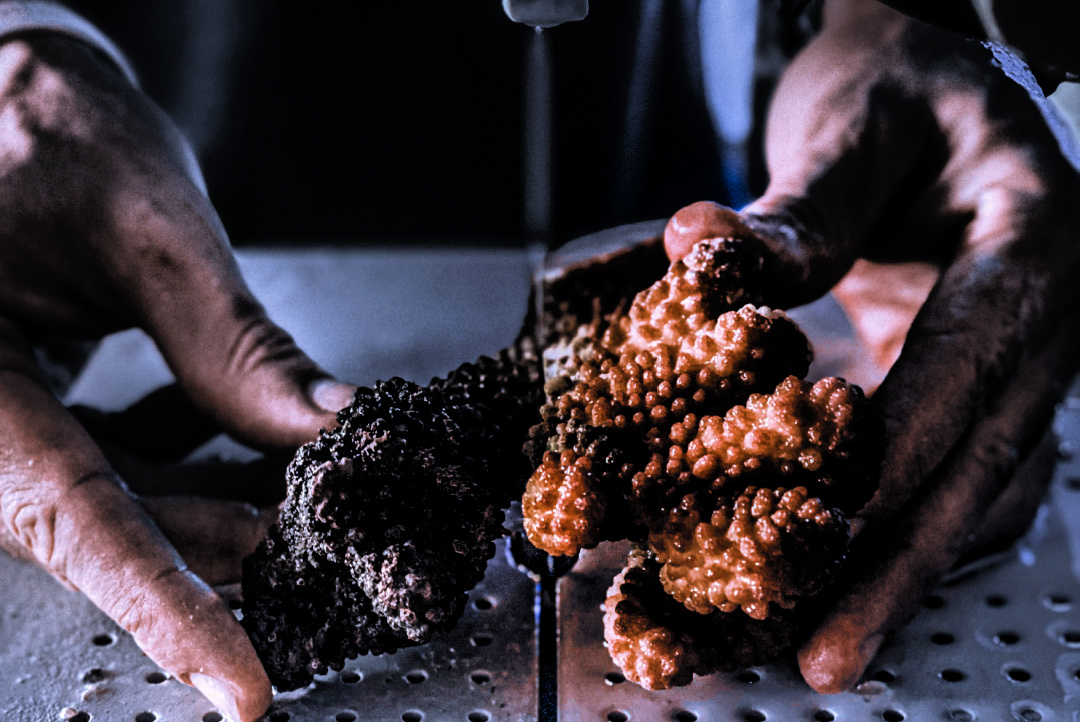 Globally, coral reefs are facing unprecedented levels of decline. With the widespread coral decline, it is of pressing importance for us to preserve and protect our reefs for future generations. MOCMI operates one of four land-based coral repositories in the US. It is here that we provide a safe-haven for rare and endemic Hawaiian corals. In the event of widespread coral bleaching and die off, our repository will serve as a genetic archive to aid in the propagation and mediation of such an event.

Corals are marine invertebrates that belong to the phylum Cnidaria, the same phylum as sea jellies. Corals typically live in large colonies made up of thousands of genetically identical polyps. A polyp is one individual coral that is a sac-like animal. These coral polyps generally range from 1mm to several centimeters in diameter. Polyps are made up of a mouth surrounded by tentacles with nematocysts, digestive tissue, coenosarc, and basal plate.

There are two main types of corals:
Hard corals (stony, scleractinians, and hermatypic) are major reef-building corals due to the rigidity of their skeletons. Their structure is comprised mostly of calcium carbonate, which is secreted from the polyp to create the skeleton in which they live. This is the “reef” that we see, a calcium carbonate structure covered in thousands of living coral polyps. Hard coral polyps have six tentacles. Three types of hard corals exist, including massive corals (ex. Lobe coral), branching corals (ex. Elkhorn coral), and encrusting corals (ex. Rice coral).

Soft corals (gorgonians, octocorals, ahermatypic) have a flexible skeleton made up of a soft protein called gorgonin. Their structure also consists of calcium carbonate, but this only occurs in small clumps called spicules. The polyps in soft corals differ from hard corals in that they have eight tentacles. Sea fans and sea feathers are soft corals.

Often referred to as the “rainforest of the sea,” coral reefs are believed to hold the highest biodiversity of all ecosystems on earth. They occupy only a mere 1% of the ocean floor but account for nearly 25% of all marine life globally. In Hawai῾i coral reef ecosystems provide a primary source of food for our island community; protect Hawai῾i’s coastline from storms and erosion; provide habitat for thousands of marine species; and cultivates economic growth through tourism, recreational activities, and fishing.

Coral reefs are facing unprecedented levels of decline. There are many types of stress than can threaten coral populations locally and globally. Here in Hawaiʻi, a few of the items listed below are at the forefront of coral decline.

Rising ocean temperatures in connection to global climate change are upsetting the balance of the pH of the ocean (acidification), resulting in a change in marine chemistry. Rising temperatures are also leading to widespread bleaching and, in many cases, coral death.

Rapid coastal development leads to erosion and runoff of sediment that reduces the available sunlight for coral to thrive.

Overfishing upsets the delicate balance of species in the coral reef ecosystem.

Vessel accidents/groundings cause damage to coral by breaking colonies, blocking sunlight if left for long periods, and contributing to pollution via marine debris and petroleum leakage. Vessel groundings break centuries of coral growth in an instant and often lead to coral death.

Many of the threats to coral increase the likelihood of coral bleaching. Coral bleaching occurs when a stressed coral ejects all or most of the zooxanthellae from its tissues and appears white. Coral bleaching leaves coral colonies vulnerable to stressors that may result in death.

MOCMI operates one of only four land-based coral nurseries in the United States and strives to protect all rare and endemic species of coral in Hawai῾i. In the case of widespread coral die-off, MOCMI’s coral repository will provide a safe-haven for corals of Hawaiʻi and serve as a genetic library from which to draw upon for mitigation projects.

Help protect coral reefs while spending time in the ocean.
Wear reef-safe sunscreen
Do not stand on or touch coral reefs
Take only photographs (leave all shells, coral, and organisms)
Observe marine life from a safe distance