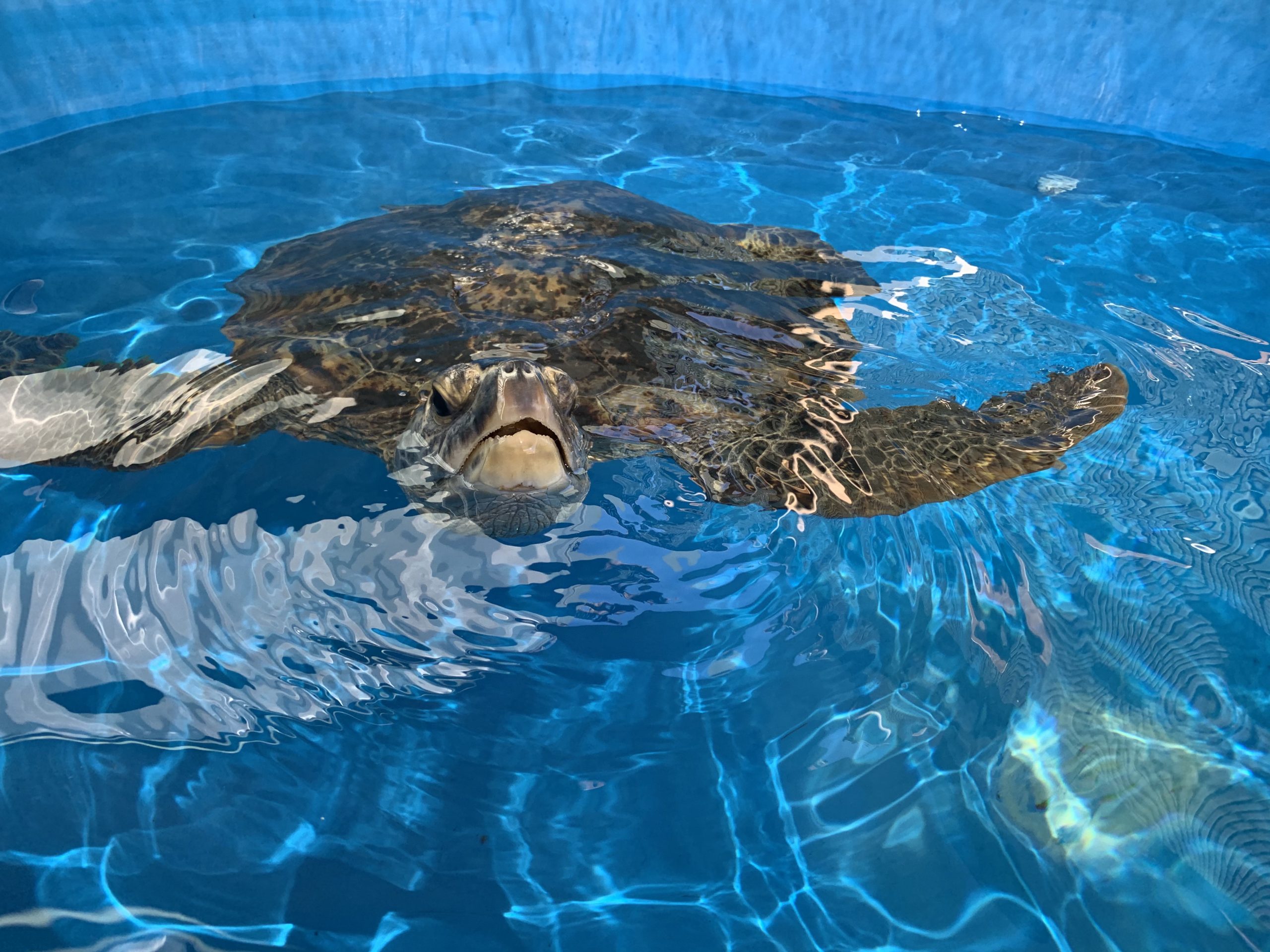 Our story begins on Lawaʻi Beach on the south shore of Kauaʻi, a favorite spot for sea turtles to come to rest and feed. On September 8, 2020, a call came into the sea turtle stranding hotline from nearby resident, Chris Raymond. Chris reported that he had observed a large turtle in the water over the last several days that appeared lethargic and had difficulty swimming. The very next day, another resident, Dr. Elaine Kubota observed a turtle swimming abnormally in Kukuiʻula Harbor. The animal was lethargic and had limited mobility of the right front flipper. Elaine went home to seek assistance, but the turtle slowly returned to the ocean.

Later, that same day,  Elaine noticed four turtles on the beach close to Spouting Horn, about ¼ mile from Kukuiʻula Harbor. One of the turtles was unable to pull itself out of the water. The turtle had an enormous swelling of its right shoulder (about the size of a soccer ball) and could not move its right flipper. Elaine immediately called the sea turtle stranding hotline.

This 115 lb. honu was rescued from the beach and ultimately transported to Oʻahu via Hawaiian Air Cargo for further assessment and treatment by NOAA contract veterinarian, Dr. Gregg Levine. On the admit exam, the turtle appeared in good nutritional condition, though it was extremely lethargic. Its right front shoulder was extremely swollen, while the lower portion of the right front flipper was normal in appearance. This presentation is in stark contrast to flipper injuries, usually caused by fishing line entanglement. Fishing line entanglement injuries typically present with a more normal appearing shoulder and an extremely swollen lower portion of the flipper.

The patient appeared unable to move the right front flipper at initial examination. Injuries to the carapace (the top shell) close to the right shoulder were also observed.

Based on the diagnostic workup, Dr. Levine suspected a severe ‘gas-forming’ bacterial infection in the right front flipper.  This infection likely occurred secondarily to a blunt force trauma to the turtle, causing fractures to the carapace (top shell) and plastron (bottom shell) – possible vessel strike.  The severity of the trauma was such that bony material from the fracture might have been driven into the shoulder muscles.  The dead bony material and injured muscle set the stage for this devastating infection. As there was no fracture of the long bones, there was hope that the infection could be treated, and perhaps this honu would have a chance of regaining function to the right front flipper.  With this knowledge, the team moved into the treatment phase.

After its first treatment, it was clear that any hope for recovery would require extended medical therapy and very close attention by a veterinarian.  Thus the NOAA veterinary team reached out to the Maui Ocean Center Marine Institute (MOCMI) to partner on this case and take the great responsibility for continued and long-term care of this very special patient.  MOCMI welcomed this honu from Kauaʻi with open arms, and the real healing journey of top notch veterinary medical care and rehabilitation therapy began.

On September 12, 2020, only three short days from its rescue at Kukui’ula small boat harbor, this turtle was transferred from NOAA veterinary staff working in cooperation with VCA Kaneohe Animal Hospital over to MOCMI via Hawaiian Air Cargo.

Maui Ocean Center Marine Institute (MOCMI) is a 501(c)(3) nonprofit organization with a mission to inspire lifelong environmental stewardship and ensure the survival of coral reefs and sea turtles in Hawaiʻi through science-based conservation efforts, education, and outreach.

Since 2016, MOCMI has worked in partnership with NOAA Fisheries to provide a comprehensive sea turtle stranding response program on the island of Maui. MOCMI’s team of staff, student assistants, interns, and volunteers respond to reports of sick, injured, distressed, or otherwise compromised sea turtles across the island.

Currently, NOAA is extremely limited in its capacity to provide rehabilitation services to injured sea turtles due to COVID-19 restrictions. Fortunately, MOCMI is able to maintain operations and assist during these challenging times

The turtle arrived at Maui Ocean Center Marine Institute (MOCMI) on the evening of September 12, 2020. It was here that Dr. Paul McCurdy (MOCMI veterinarian) and MOCMI started their 6 week journey of intensive medical care and rehabilitation therapy with this special patient.

The initial treatment plan included antibiotic therapy and flushing the wound site on the shoulder daily with fluids. The superficial wounds on the carapace were treated topically with iodine and antibiotics. The daily flushing of the wound proved successful in removing much of the debris from the wound site. A sterile, wet dressing was also inserted into the wound and replaced every 12 hours to improve debridement. This intensive therapy continued for the following three days.

Following four days of dry-dock (patient treated in a temperature controlled room, not in water), the team at MOCMI transferred the patient to one of their outdoor rehabilitation pools. The patient’s activity level was high in the pool; however, it only exhibited 10 – 15% mobility in the injured flipper.

Over the next week, the patient continued to receive antibiotic therapy, and the wound site was flushed daily to remove any remaining debris. It was closely monitored during this time and offered various food items each day; however, it showed no interest in eating.

The decision was made to tube feed the patient to help stimulate its appetite. The following morning, the patient ate all of the food offered.  To the staff at MOCMI this was cause for celebration!!!! For a marine animal in a rehabilitation setting, and overcoming a life threatening infection, its eating regularly was a huge milestone.

Nutrition is a form of medicine for rehabilitation patients. Over the next ten days, MOCMI staff gradually increased the amount of food offered to the patient to meet the target goal of 5% of its body weight. Antibiotic therapy continued, and flushing of the wound was reduced to once every three days. MOCMI staff continued to treat the carapace wounds topically with iodine and antibiotics. Throughout this time, the injured flipper’s swelling began to subside, and the patient regained substantial mobility of the injured flipper.

By early October, the turtle had regained nearly 90% mobility of the injured flipper, maintained a healthy appetite, gained weight, and became noticeably stronger. The decision was made by the team to discontinue antibiotics. MOCMI staff continued to flush the wound every three to four days and measured the volume of the wound pocket to help determine healing.

Dr. McCurdy performed two sets of follow up x-ray studies to monitor internal healing and rule out bone infection.  Blood samples were analyzed to ensure there were no signs of infection or inflammation in the body.  The patientʻs wounds continued to heal and it became progressively stronger each day.  After 47 days of rehabilitation, the veterinary team (MOCMI/NOAA) including Dr. Paul McCurdy, Dr. Gregg Levine, Dr. Michelle Barbieri, and Shandell Brunson (NOAA Sea Turtle Stranding Coordinator) all agreed that the patient was suitable for transport back to Kauai Island for release into the ocean.

Before release, MOCMI staff tagged the turtle. Two types of tags were used: mototool (shell etching) and Passive Integrator Transponder (PIT) tagging. To mototool tag, MOCMI staff used a Dremel tool to safely etch the shell with the island’s initials and the number of the stranding case that year (for example, KA for Kauai and 18 for the eighteenth turtle stranding case in 2020).  The groove is filled with white paint that is harmless to the turtle. PIT tags are inserted under the skin into each of the turtle’s hind flippers. These tags, about the size of a grain of rice, have an internal microchip detected by a scanner.

On Friday, October 30, the patient was shipped via Hawaiian Air Cargo back to Kauaʻi for release.  Jamie Thomton, NOAA Fisheries Kauaʻi Marine Mammal Response Program Coordinator, picked up KA18 from the airport and drove it to Poʻipū Beach County Park to join the DAR team of Mimi, Heather Ylitalo-Ward, and Aaron Swink to assist with its last leg to freedom.  Kauaʻi Ocean Safety lifeguards provided support to keep public observance safe while the team carried KA18 on a blue tarp from its crate.  It was so excited it flapped its flippers and moved quickly off the tarp onto the beach, where it finished with a strong energetic crawl to the ocean to finally swim away to its wild home on Kauaʻi’s south shores.

The next night, nearby resident, Katie Rampen observed KA18 again sleeping soundly on its “home” beach, coming full circle on its rescue journey.

The community assistance and teamwork involved in helping a large injured sea turtle is always a fairly big undertaking. Of course, during a pandemic, the obstacles can become even larger. The story of this one turtle’s healing journey and its second chance back in our island’s waters is a great example of three islands and many partners working together to make good things happen in a very challenging time. This truly is the story of one lucky honu’s healing journey.

Due to the pandemic, NOAA and partners must make operational decisions considering COVID-19 that impact our  marine mammal and sea turtle stranding response capabilities. We need to use the fewest number of people possible, follow social distancing protocols, and use personal protective equipment. Currently, we are extremely limited in our ability to handle and transport live animals, and to conduct post mortem exams on dead animals. However, we are still able to conduct many other response activities such as in this unique case.

NOAA encourages the public to continue reporting all marine wildlife stranding incidents to our statewide hotline: 888-256-9840. Additionally, the public can help NOAA, DLNR and MOCMI continue to track the health and recovery of this lucky honu by reporting any sightings and photos of KA18 to Respectwildlife@noaa.gov.

The boating community is reminded to Go Slow, Sea Turtles Below! There are a number of actions that vessel operators can take to minimize the potential for a boat strike. This includes:

This reflective decal is also available to boaters upon request (Respectwildlife@noaa.gov):